Our collection of Boats and Engines 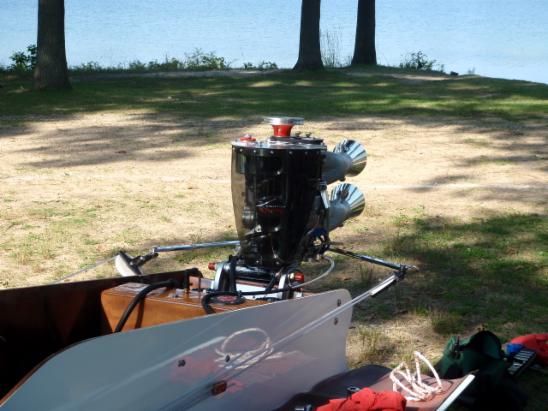 September 2009 in Hillsdale Mich. we tested the TX444DK engine on a Ropp Hydro.  This engine developed by Doug Kay ran great right out of the box.  The boat, even though a 8 year old boat had never been in the water.  We had no idea how this combination would run or which prop to use or how to setup the whole rig.  Needless to say we were very happy with the outcome. Doug and Aeroliner Race Boats, LLC will continue to develope this unique combination.

Bellow is a link to a You Tube video of this test.

C Mod Engine on a hydro built for Harry Brinkman.  This is another of Doug's fine engines.  Alan's son took his first ever ride in a race boat in this rig at Pineville, LA in April 2010 and did rather well. Doug has built another C Mod engine with two pipes, in 2012 we were third in NBRA national points. 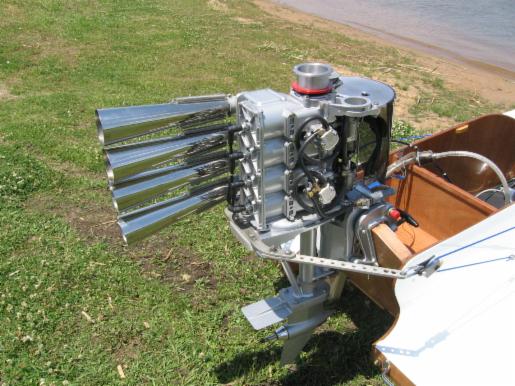 We have other racing equipment including Mercury outboard motors and racing boats that have been restored for demonstration purposes.  These may be offered for sale at some time in the future.

September 11, 2010 we ran at Hillsdale, MI.  Doug Kay brought Alan's Mark 75 based 850 MOD six cylinder engine.  The sound of that engine was fantastic.  For the first time out and running three races the boat with Rick Welsh driving finished third, first and fifth in the three races run during the weekend.  Below is a link to a YouTube video

We also brought a Mark 20H that we just assembled.  This engine has the full conversion including the 16:21 gears.  We ran in the A Mod class and even though 50 to 60 pounds overweight we were able to take two overall third place finishes.  Here is a link to the engine on You Tube: This engine is for sale.

This 1957 Sid Craft A/B is nearly all original.  The only thing changed is the fabric cover and the red paint.  We bought this boat from Len Lupton who not long ago was building reproduction Sid Crafts.  This boat is originally from Long Island New York.  The boat had been in storage for nearly 40 years and is in suprisingly good condition.  The fuel tank is a rare Quincy Welding tank that originally was purchased with the Mark 20H Quincy modified engine and raced on this boat. 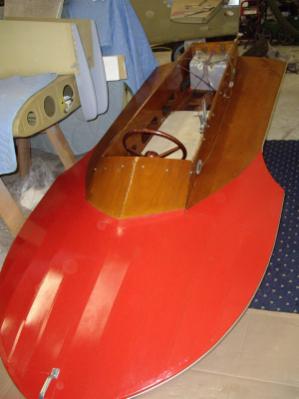 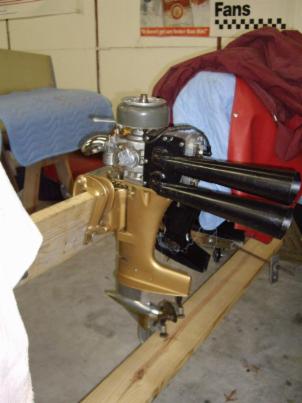 This engine also bought from Len is a numbers matching Mark 20H that has been modified by Quincy Welding.  It has a Carter Model N carb., converted to Alky, stacks, reworked Spark advance, Quincy pistions etc.  The engine and boat were used by David Christner in 1959 at Lakeland, Florida going faster than anyone else in B.  We have sold this rig, thanks Mark S 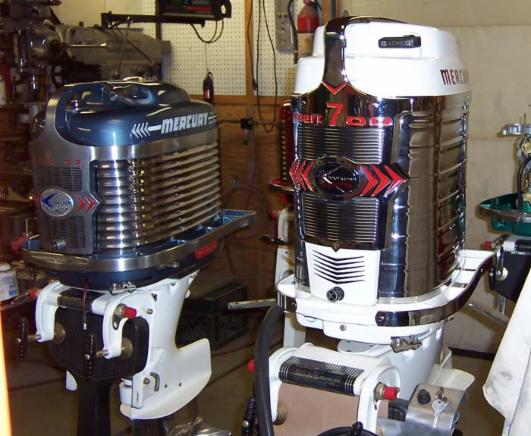 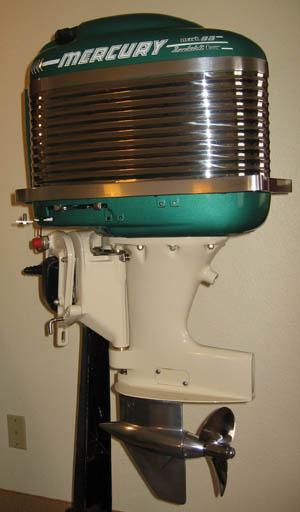 Our second 55H, a numbers matching engine found in Wisconsin. 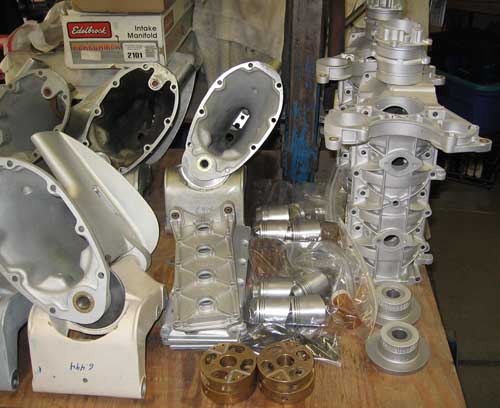 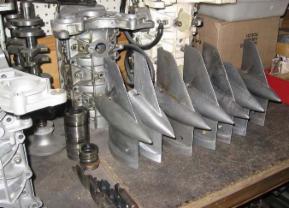 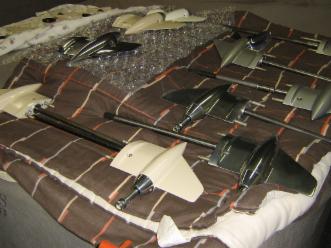 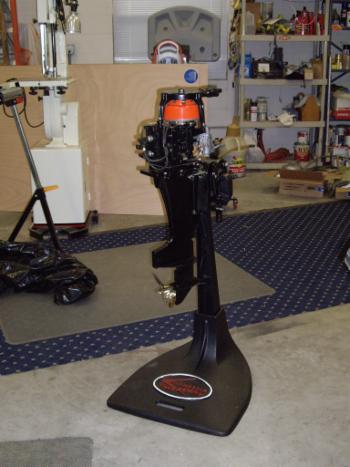 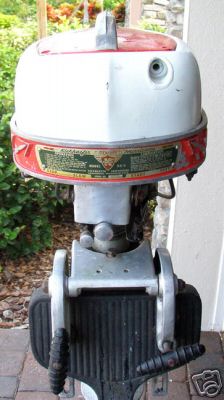 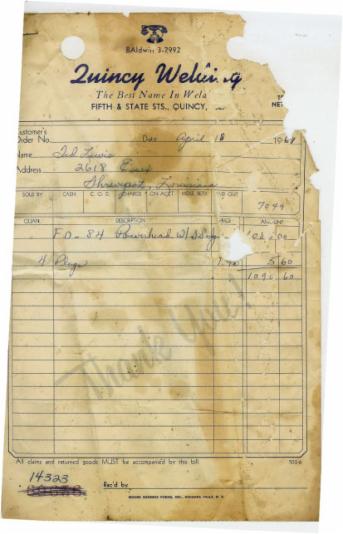 The original bill for a D powerhead, we now have a number of Quincy products.  Including 12 Loopers and a number of flat heads. 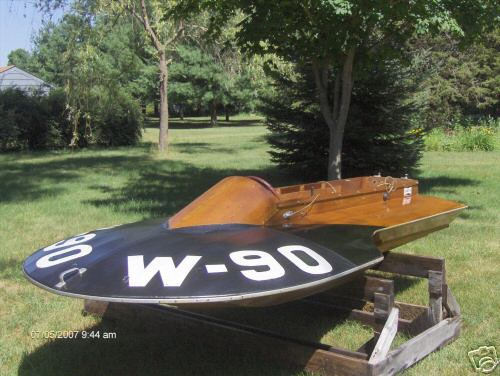 This Sid Craft once raced by Gerry Waldman, it was built in the early 1960's 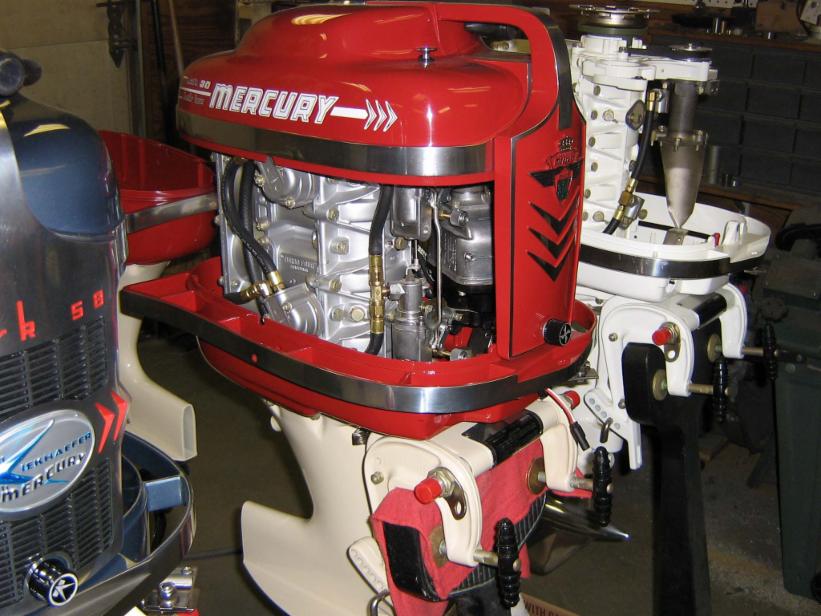 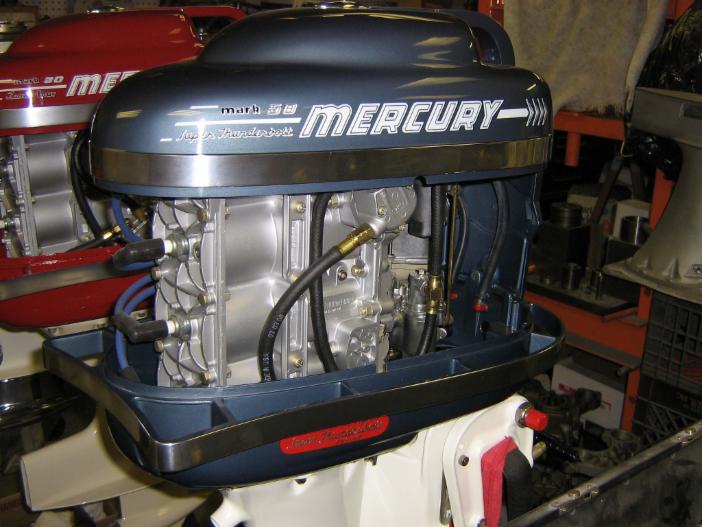 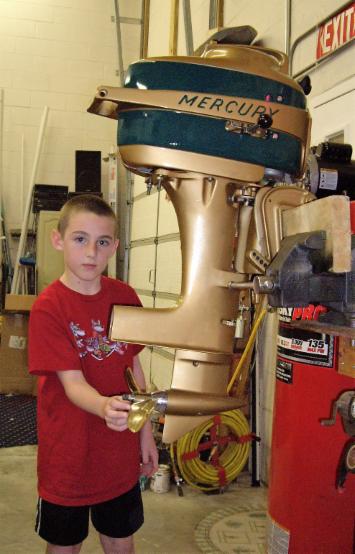 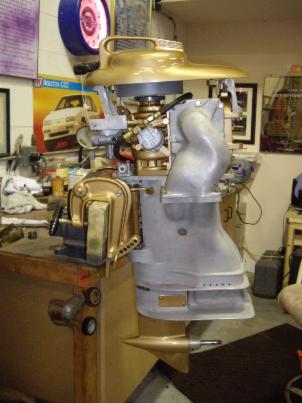 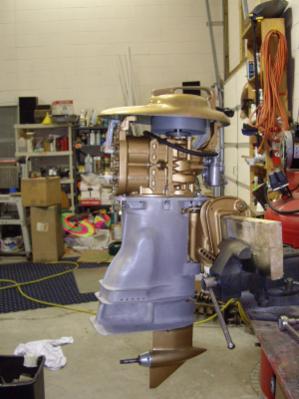 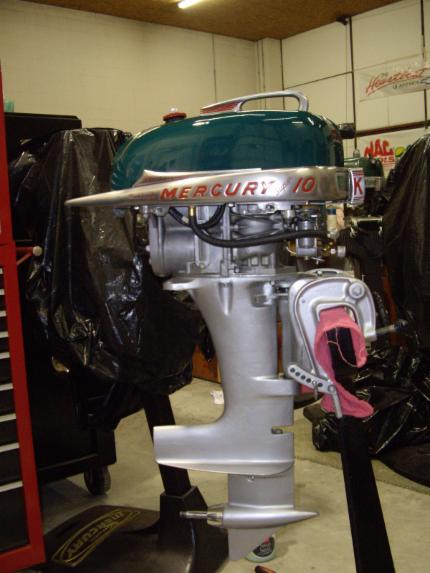 Numbers matching KG7H,  we have a KG7Q that we are leaving unrestored so there can be a comparision to show how the engines look before we do a restoration. 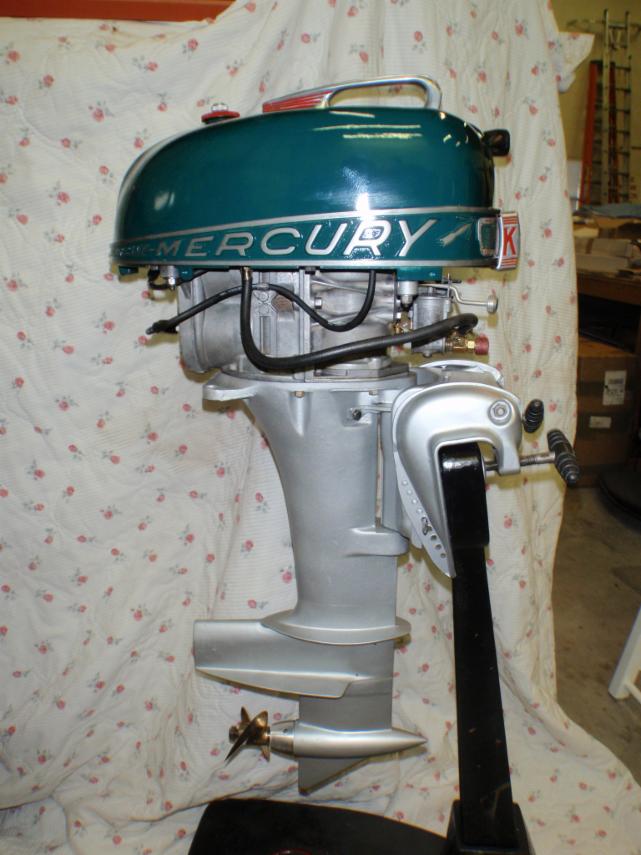 Numbers matching KG4Q purchased from Charlie Miller.  This engine was one that a dealer converted to a "Q".  Part of the conversion was to stamp the letter Q on the serial tag and the crankcase.  It looked like the engine had very little use and is standard bore.  We restored the engine with new bearings, rings, pistons, rods and complete new gear case.  The original bushed cone nut was replaced with one of our reproductions.  The original has to be machined off the gear case by Doug Kay. 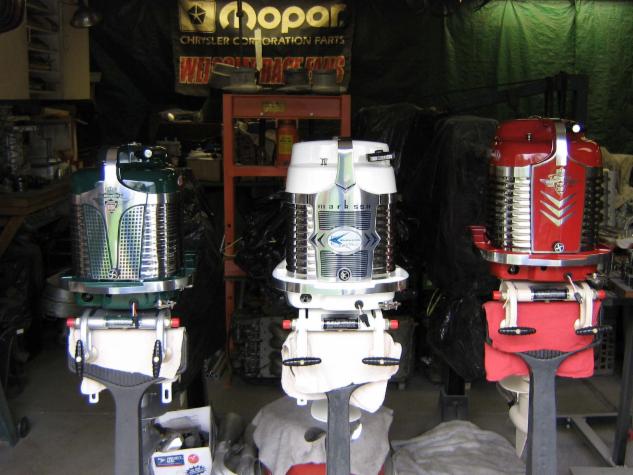 Green engine is what a 1955 55H might have looked like, the white engine is a later 55H engine we have and the 30H is owned by Alan. 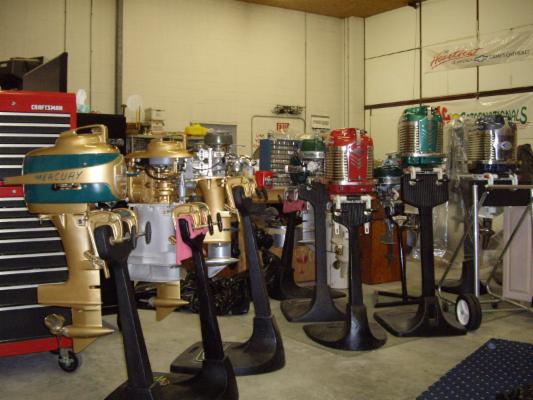 A few of our completed engines. 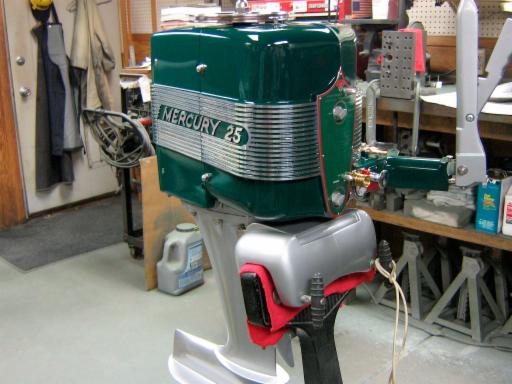 This KF9 was restored for Alan's collection. 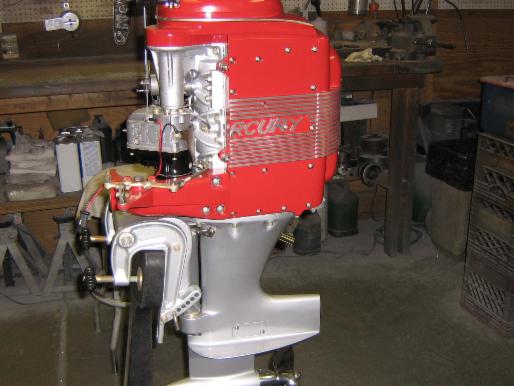 Mark 40H, this engine had it's ports altered so badly by a previous owner that we could not restore it to it's original condition.  The engine was resleaved to 44 cubic inches, had a Harry Brinkman port job, the cylinder heads were replaced with high compression heads, new larger carbs were added and some internal modificatons were made.  First time out it ran 82MPH using an untested prop and on a D hydro. 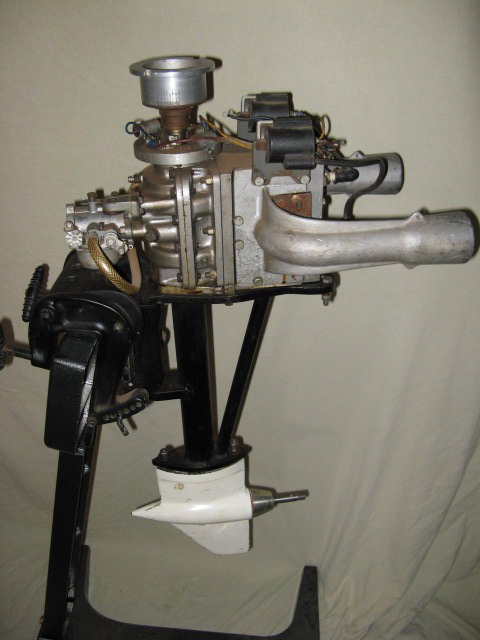 This is a Quincy "A" Looper purchased by Alan that is now  restored  This engine was used by the Champion Spark Plug Company for testing their new spark designs.  Alan has one of each Looper made by Quincy. 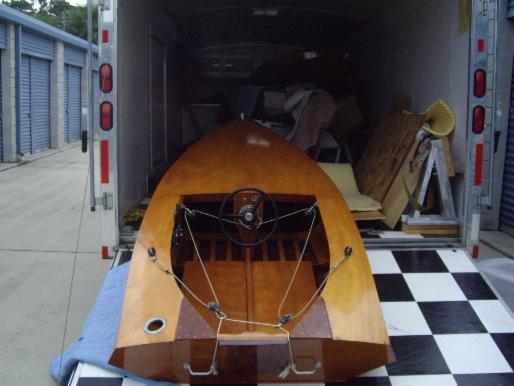 This early 1960's Sid Craft is in great shape, it is one of six Sid's purchased from Len Lupton. (Sold)